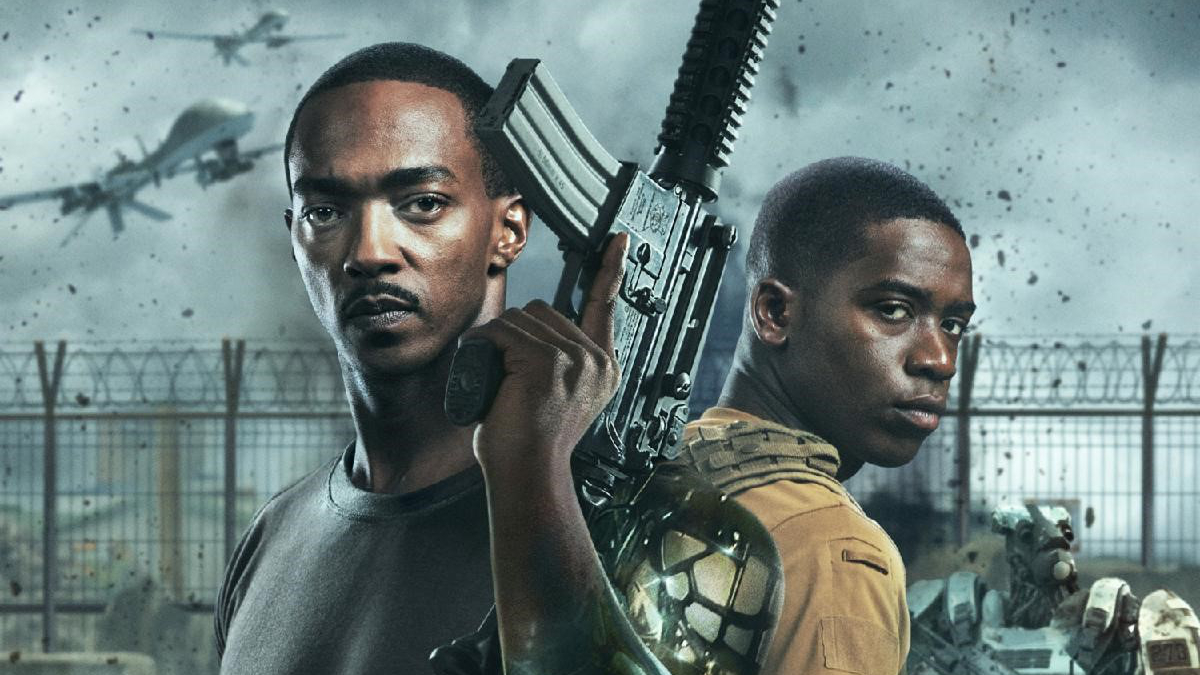 One of the most important things I consider when reviewing a film is its sense of self. Does it know what it is? Does it have a central thesis or is it just mindless fun? Does it commit to that thesis in a compelling and understandable way? Some of my favorite films are “bad” movies that know exactly what they are and run with it. But there are few things more tedious than a film that should have been very that but instead thinks its a film with an important central message that it never fully articulates. May I present Outside the Wire.

The year is 2036, and the United States is embroiled in a war in the Ukraine. Robot soldiers fight alongside human military. Lt. Harp (Damson Idris) is a drone pilot who disobeyed an order and fired on a missile launcher in an act that killed two soldiers but saved 38. As punishment, he gets sent to work with Leo (Anthony Mackie), who is secretly a state-of-the-art android. They’re part of a dangerous mission that goes “outside the wire”; that is, outside the demilitarized zone and into hostile enemy territory.

I won’t go into the specifics of the mission, as that would constitute spoilers, and honestly, it isn’t truly important anyway. While the mission’s official goal is to deliver vaccines to a region that’s been hit with a cholera outbreak, there is a lot more going on under the surface. Or at least there seems to be. The film does its best to hint that Harp and consequently the audience isn’t being let in on exactly what he’s being thrust into. Sad thing is, I don’t think the movie itself knows exactly what he’s being thrust into, either.

For the first two acts of the film, Outside comes off as a relatively innocuous sci-fi/action piece. It’s competent if not spectacular, and there are enough set pieces to keep the energy flow consistent. The third act, however, goes completely off the rails as the plot piles twist upon twist onto the narrative in what seems to be an effort to make a Very Important Statement on the futility of war and collateral damage and the military/industrial complex. Even when characters outright state in the dialogue exactly what this message is, it still doesn’t seem sincere. It really feels like something slapped on at the last minute to elevate the film to a place it never really belongs.

So what about those actions sequences? They’re fine. Director Mikael Håfström doesn’t have the keenest eye for choreography or framing, but I’ve seen a lot worse. The scenes are more coherent the less players are involved, with large skirmishes quickly becoming confusing. This could charitably be seen as mimicking the chaos of war, especially considering we’re seeing all of it through Harp’s eyes, and this is his first time seeing a battle up close and not in the safety of a command HQ.

The best action sequences, however, involve Leo taking on opponents all on his own. I’ll knock the film points for waiting a full hour into a two-hour film to give Anthony Mackie an actual fight scene, but his scenes are genuinely thrilling. Mackie’s already proven himself as a charismatic fighter in the MCU as the Falcon, but here he’s much more immediate, going from enemy to enemy with a brutal, ruthless, and ultimately hypnotic grace. He does tend to curb stomp his opponents, but even that only adds to the excitement.

Mackie’s other big contribution to the film is his chemistry with Damson Idris. Both actors are great in their respective roles; Idris’ performance is actually very compelling at times. However, they’re best when paired with each other. There is a palpable energy between the two that alternates between varying levels of distrust, camaraderie, and survival. Harp never fully trusts Leo, but he knows they need to work together to make it through the mission. It’s a very complex rapport between the two, but it’s also the film’s most notable and organic aspect.

The film is so focused on this rapport that the rest of the cast feels all different types of extraneous. The ostensible villain of the piece, a warlord named Victor Kobal played by Pilou Asbæk, barely registers even though Asbæk is clearly taking his role very seriously. On the other hand, an aid worker named Sofiya played by Emily Beecham makes such an impression that the fact that she isn’t in more of the film is a definite mistake. Introduced as running a home for war orphans, we quickly find out that she’s wickedly efficient with a gun, and while she’s part of the roiling miasma of plot twists in the final act, she seriously gets done dirty by the script. Beecham brings effortless gravitas to an otherwise thankless role, and she deserved better.

That dovetails nicely into the film’s main problem, which its lack of identity. Is it just a good, old-fashion, straight-to-home-video action film or is it a Serious Picture with Serious Statements to make? It so very much gives off the vibe of a theatrical film that eventually got burned off on home media, the kind of film you’d be surprised with at a Blockbuster Video back in the day and think “Gee, I know this actor, but I’ve never heard of THIS film.”

For the first 90 minutes, that’s exactly what this is. It’s professional enough to look like a lot of care went into making it, and it has some committed performances and nice set pieces. It’s the last 30 minutes that ruin the film, however, when it tries to pretend its more than that. It wants to say a lot of things, but it doesn’t properly articulate most of it, and it clearly has not done all of the proper work to get to the point where the audience would buy it. So many of the plot twists are revelations that come seemingly out of nowhere, and if we’re being completely honest, most of them don’t make a lot of sense. It’s meant to make us feel something, but it only serves to put a barrier between the film and the audience. We end up tuning out at the exact moment when we should be tuning in.

Outside the Wire is in the end a lot like Anthony Mackie’s Leo. Both have strong skeletons built with precision, and both have the outward appearance of something alive and vital. But if we looked inside either one, we’d actually see a mess of random wires and get confused by some of the components. Plus, you could turn both of them off with a button if necessary.

Outside the Wire can be streamed exclusively through Netflix.

“I prayed for the death of Heather Chandler many times, and I felt bad every time I did it, but I kept doing it anyway. Now I know you understood everything. Praise Jesus, hallelujah!”

I bought this shirt, but now I’m worried it’ll make me look dangerous. #jemandtheholograms #jem #gaygeek
Look what arrived! Beautiful, sexy, retro.
This is the way. Until they leave you for some hot, young, blonde CGI Jedi. #valentines #gaygeek
Part of a balanced breakfast. #ladygaga #chromatica #gaygeeks
Didn’t realize until today that this is what’s been missing from my life. #chrisodonnell #batmanforever #sideshowcollectibles #gaygeek #robin
This show. #thechiillingadventuresofsabrina #sabrinatheteenagewitch #sabrina #archiecomics #gaygeek