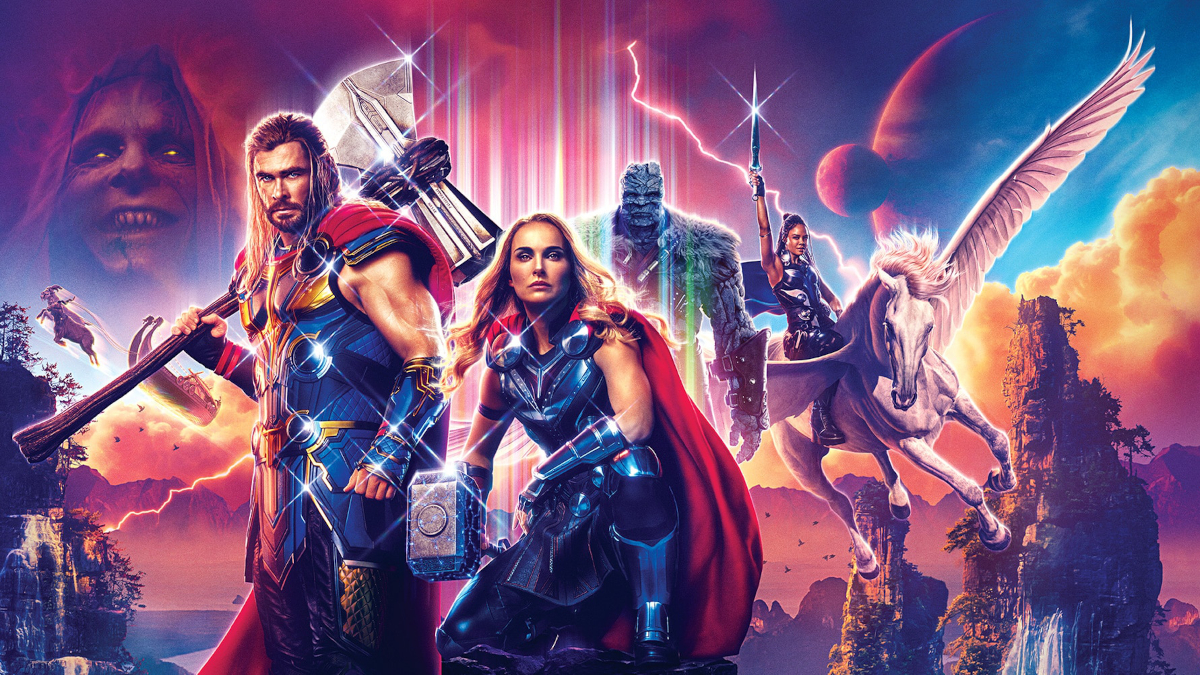 Full disclosure, I’ve never been the biggest Thor fan. Especially during the first part of the Marvel Cinematic Universe, he was far from my favorite character. Thor’s first two solo films, competent and occasionally compelling as they were, keyed into the character’s original comics energy: dramatic and very self-serious. That all changed with Thor: Ragnarok, which exploded with color, camp, and a blessed degree of self-awareness. Who knew Thor could be comedic? His most recent solo outing, Thor: Love and Thunder, aims to tap into that same vein to mixed but very vibrant results.

Since the events of Avengers: Endgame, Thor (Chris Hemsworth) has gone on a quest to find himself while occasionally helping out the Guardians of the Galaxy with their missions. During one of these, he learns that Gorr the God-Butcher (Christian Bale) is…well, butchering gods and leaving those gods’ realms defenseless. Thor puts together a team to stop Gorr that includes his rock alien friend Korg (Taika Waititi), the battle-hungry King Valkyrie (Tessa Thompson), and in a most unusual twist his ex-girlfriend Jane Foster (Natalie Portman), who is wielding a reformed Mjolnir and has been empowered to become The Mighty Thor.

There isn’t a tremendous amount of plot to Love and Thunder. That paragraph is really all there is. Director/co-writer Taika Waititi has specifically focused this film on character arcs more than outright narrative. Each one of the main characters has their own personal demons to contend with while their making their inevitable march toward the final showdown (and some actual demons). That’s admirable in its way, but it would be more admirable if the characters’ journeys were at all surprising or complex. WandaVision this ain’t. But that’s not entirely a bad thing. In fact, this is one of the few times when the style over substance approach really works.

Thor himself is really a kind of galactic himbo, listening to his heart much more than his head, impulsive, boisterous, and passionate. Plus, he’s awful big and awful pretty. It’s that kind of energy that makes Love and Thunder work better than it might otherwise have, and it’s why this film and Ragnarok hit sweeter than Thor’s other solo films. Waititi’s irreverent approach to Thor unlocks a giddy, fantastical energy that just totally works to enliven the character and his adventures.

It’s an 80s heavy metal album cover come to life through a lens of mature irony. Not for anything have Waititi’s films relied so heavily on that specific genre of music for everything from its soundtrack to its movie poster design to the fonts you see in the closing credits. It’s youthful rebellion and assertive exuberance but channeled through a heightened, phantasmagorical cinematic reality. It’s an anything goes approach that draws from some of the most bizzaro and outrageous parts of Marvel Comics.

But this energy is very much a double-edged sword. While it can lead to some thrilling and humorous moments, its reverse is a kind of aggressive darkness that would feel oppressive if it weren’t so visually appealing. There is a massive tonal whiplash experienced going into the third act, when Thor’s party arrives in the Shadow Realm to fight Gorr. This is a place that we’re told even color fears to tread, and the scenes are shot in a rich black-and-white occasionally broken up by a burst of lightning. However, the mood of the film also loses its color, and we go from galactic swashbuckling to a gothic-bordering-on-eldritch horror vibe with little evolution. It’s something the film never fully recovers from, even after leaving Gorr’s monochromatic hideout.

What keeps the film going regardless is its action pieces, its humor, and perhaps most of all its characters. Waititi knows how to stage a spectacle, and each combat sequence here is a true theatrical experience featuring dozens of combatants, creative choreography, and ample amounts of visual treats. Waititi knows how to bring out the style of each individual character, like Korg’s brute strength or Valkyrie’s graceful fluidity. The action is so spectacular, in fact, that it makes the quiet, emotional moments of the film seem slower and softer than they are. Even more than most MCU films, this film has a very much up-and-down, rollercoaster kind of vibe.

Waititi and co-writer Jennifer Kaytin Robinson keep spirits up through the film with a very particular brand of humor that doesn’t so much flirt with cringe as much as transcend it. Especially in the first act, when Thor has clearly overstayed his welcome with the Guardians, a lot of mileage comes out of Thor’s solipsism and massive ego. We’re never laughing at the characters as much as with them, and Waititi even weaves this humor into each character’s individual story and progress. But there’s also plenty of humor outside of the characters, from seeing New Asgard turned into a chintzy tourist trap to a running joke about how Thor’s chariot-pulling goats are constantly screaming. (Trust me, that last one never fails to work, no matter how many times they do it.)

All of this is centered around some excellent performances by some veteran members of the MCU. Everyone’s on their game, and everyone looks like they’re having a great time. Even Natalie Portman. (I know, right?) Portman is especially good here — and shockingly athletic — able to both channel Jane’s mortal vulnerability and heroic adrenaline. She seems more evenly matched with Chris Hemsworth this time around, and the two have some excellent Thor-and-Thor moments that ends up helping to re-examine what we know about the God of Thunder himself. Tessa Thompson and Waititi himself are both fantastic in their roles; if you liked them in Ragnarok, this is much more of the same and it’s very welcome. It’s Christian Bale that really, truly makes an impact though. His Gorr is a sympathetic monster, a man with relatable motivations but terrifying execution. While he’s not the most complex villain in the MCU, he’s certainly one of the most magnetic and intriguing.

Speaking of intriguing, at least in a very basic sense, Love and Thunder ends up being the queerest movie Marvel has put out to date. Granted, that bar is ridiculously low, but they did clear it. Valkyrie is explicitly bisexual this time around, not only flirting with several female characters (including Jane) but spending an entire scene discussing her grief at losing her partner in the past. We find out that Korg’s species reproduces when two males form a bond. Russell Crowe appears as a flamboyant, hedonistic Zeus who is not only queer-coded himself but has a harem consisting of four “Zeusettes” and two of “Zeus’s Pretty Boys” as they’re listed in the credits. Plus there’s more rainbows than a fully-stocked Target in June, and one of the post-credits scenes hints at the introduction of one of Marvel’s queer characters.

And of course, we have the scene glimpsed in the trailer where Thor ends up naked in front of an area full of gods. Trust and believe, there’s a reason everyone has to make a Will save to avoid fainting. Hemsworth has never been this swole or this shredded in a film before in his life, and we get to see every inch that a PG-13 rating will allow.

Let me let you in on a little secret. I write a lot of my reviews in a sort of stream of consciousness. I don’t do outlines. And as I look back on what I’ve written here, I realize that the fact that the narrative in Love and Thunder is shoddy and weak isn’t really a big deal? I guess? This is a Fun Movie, no doubt about it. Colorful, funny, exciting, with the contrast and saturation turned way up. It’s as big and bold and vibrant as you’d expect a top-tier comic book film to be. It’s also kind of as shallow as you’d expect, but the spectacle is so strong and the cast so uniformly talented that it all works. This film is peak Himbo Energy and I can dig it.

Dave Lizewski: How do I get a hold of you?
Hit Girl: You just contact the mayor’s office. He has a special signal he shines in the sky; it’s in the shape of a giant cock.

Grabbed an autograph from a childhood crush/hero! ❤️ #leemajors #sixmilliondollarman
In honor of Pride month, I ordered this monstrosity from Lego. Happy Pride! 🏳️‍🌈
Happy Star Wars Day! #starwarsday #maythe4thbewithyou #gaygeek
I bought this shirt, but now I’m worried it’ll make me look dangerous. #jemandtheholograms #jem #gaygeek
Look what arrived! Beautiful, sexy, retro.
This is the way. Until they leave you for some hot, young, blonde CGI Jedi. #valentines #gaygeek