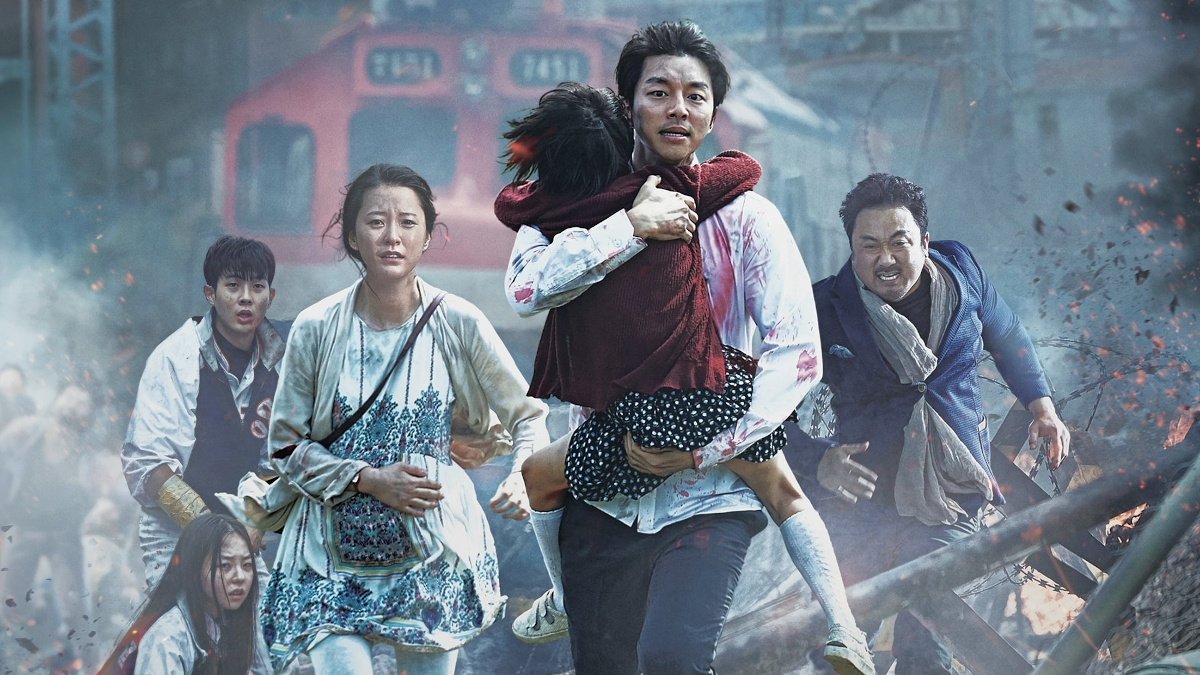 Fewer genres of film are more relevant in a time of pandemic than zombie horror. After all, these films tend to be about protagonists being trapped in place, watching loved ones succumb to infection, terrified for their own survival. A bit too on the nose, yes? But a good zombie film, no matter how bleak, contains at least a glimmer of hope that the onslaught can be weathered and shines a light on just what exactly makes us human. And Train to Busan, South Korea’s blockbuster hit from 2016, is just one of those films.

The titular train is a bullet train running from Seoul and holding our protagonists and (eventually) more than its share of the rabid, ravenous undead. Soek-woo (Gong Yoo) is traveling with his young daughter Su-an (Kim Su-an) to see Su-an’s mother in Busan when an infection begins turning the passengers on the train into zombies, something which they soon find out is happening all over the country. The uninfected try to survive the onslaught long enough to get to Busan, where they believe the military has successfully established a secure outpost against the onslaught.

While Train to Busan borrows from the zombie films that came before, especially World War Z, it is its own unique, fascinating creation. Director Yeon Sang-ho, working for the first time in live action, has crafted a tense, hypnotic thrill ride that never sacrifices character for plot and has a genuine love for both the genre and its cast. There are no tropes here that haven’t been seen in zombie cinema before, but they’re presented with such confidence and enthusiasm that they never seem like cliches. We don’t need to know the how or why of the zombies; indeed, the film never truly explains how the infection started. But we don’t need to. We pretty much know the score at this point.

The film’s true focus isn’t on the zombies, anyway. This is all about surviving the literal waves of undead, not about stopping the infection or discovering its source. There are moments of intense, raw action mixed with scenes of quiet, even heartbreaking drama as the survivors fight through cars of the undead only to end up fighting with themselves as social veneers drop, and civility gives way to terror and panic. The film takes place virtually in real time, and it’s fascinating to see how quickly the situation reveals the true character of each of the passengers.

And while we have a lot of passengers to keep track of here, it’s easy to become attached to many of them. All of them have their own small character arcs, and even the most odious of them retain enough humanity to make them relatable. Gong Yoo’s compelling performance as Seok-woo is matched skillfully by young Kim Su-an, who plays her character with a savvy and wit far beyond her years. The film’s other main stand out is Ma Dong-seok (aka Don Lee) as big, burly Sang-hwa, a no-nonsense tank of a man who’s as charming as he is powerful.

But truly, there isn’t a bad performance among the entire cast. This is true even in the final act of the film, when the characters’ decisions become increasingly, often frustratingly foolish. And while the entire cast is written well, it is a little disappointing that all the female characters are generally more passive than the men. That being said, the female characters do tend to elicit the most amount of sympathy and more often than not are seen as the characters who hold onto their humanity the most while the rest of the uninfected turn against each other.

There are many reasons to check out Train to Busan, especially if you’re a horror fan. It’s simply one of the most compelling, exciting, and captivating action/horror hybrids in years. It grabs the heart as well as the soul for two full hours, speeding to a satisfying emotional climax. And in the end, it reminds us about the resilinecy and strength of the human spirit, even when the world is falling around us.

Train to Busan is available for streaming through Netflix, Amazon, Vudu, and many other platforms.

Next week, we go from surviving the undead on a train to surviving criminals in a house. Keep your wits about you as we discuss You’re Next.

“I hated her… so…much. It—it.. the f—, it—flame… flames… flames on the side of my face, breathing, breath… heaving, breaths… heaving…”