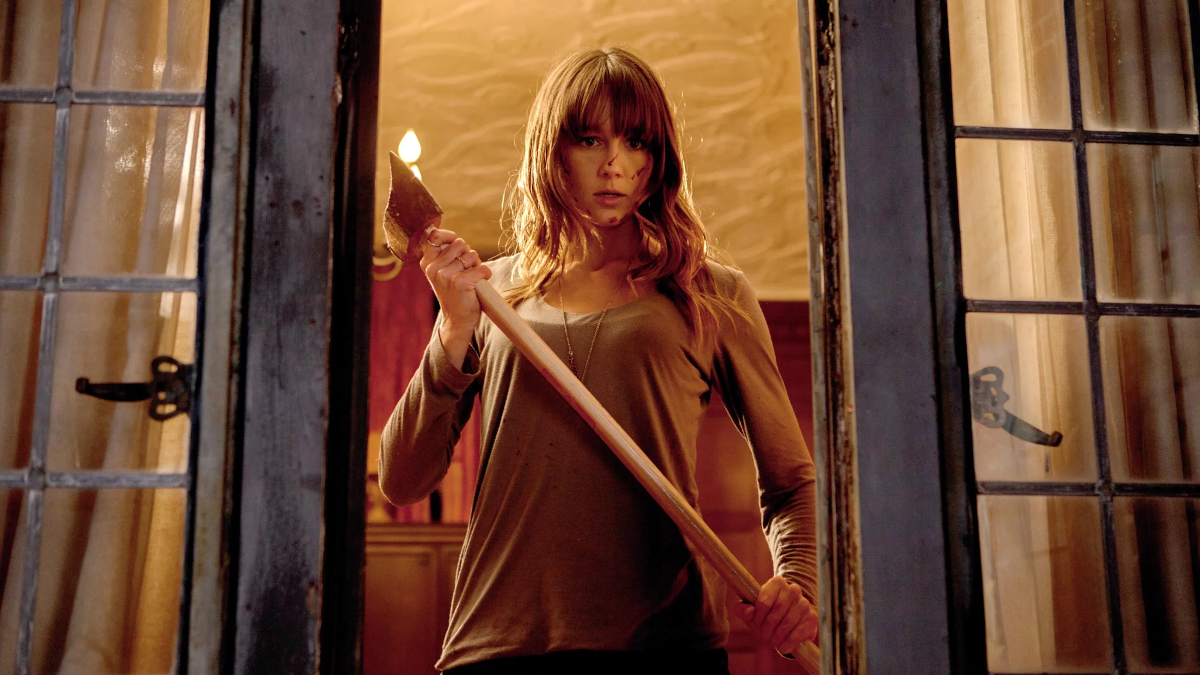 The home invasion subgenre of horror might not be the most obvious thing to explore for people who can’t leave their house. After all, this genre thrives on the fear of our most sacred spaces being violated. But You’re Next isn’t your typical home invasion horror film by any stretch of the imagination and—as it features one of the most wicked cool Final Girls in modern horror—ends up feeling relatively hopeful.

The setting is a McMansion owned by the Davisons, a wealthy family getting together to celebrate the parents’ anniversary and the father’s retirement. The kids all bring their significant others, the most out of place one being the Australian-born Erin (Sharni Vinson). In the middle of another dysfunctional family dinner, everything goes to hell when assailants in animal masks start firing crossbows through the windows. As the family panics and the bodies start falling, it’s up to the remarkably resourceful Erin to figure out how to help the family survive the onslaught.

That plot summary doesn’t really speak to the actual experience of watching the film, however. Not even close. There are layers upon layers in You’re Next’s relatively simple and succinct narrative, including plenty of subtle social commentary, some supremely cutting black humor, and subversion of slasher film tropes. Director Adam Wingard and writer Simon Barrett have made an insanely well-crafted and gripping film; lean and efficient, practically airtight.

There are few contingencies and plot bends that aren’t accounted for or laid out in the first act, and that includes Erin’s remarkable resourcefulness and courage. The only person in the cast who keeps her head about her and actually thinks things through during the crisis, her ability at first comes off as unusual and curious. When we find out why she’s so good at staying calm, during a quiet conversational moment in-between the frequent set pieces, it literally turns the narrative energy upside-down. You start to wonder who’s really the most dangerous person in the story.

Vinson herself is a captivating Final Girl, with a natural appeal and earthy charisma. The entire cast does a great job of making their characters seem fully three-dimensional, especially Nicholas Tucci as the family’s black sheep Felix, but Vinson more than anyone puts a fully human face on this film. Even the characters who have less screen time make an impact, grabbing us by the throat as they fall. It’s even more impressive because the family is set up as fairly unlikable, awash in oblivious and elitist privilege, but the actors’ emotional reactions are so genuine that you can’t help but feel for them.

And it’s not a spoiler alert to say that several of the cast meet horrible, grisly ends. With a cast this large in this kind of film, that’s inevitable. In fact, there’s a bloody attack every couple of minutes after the invasion starts, leading to an intoxicating feeling of constant dread and fear. But it’s how the kills happen that really sets You’re Next apart. The attackers have set up traps and planned for every contingency (except Erin, as it turns out), turning the house into a death trap. And Erin proves that literally anything she can get her hands on can be improvised as a weapon. Let’s just say that you’ll never look at your blender quite the same way again after this.

There are plenty of ways that You’re Next gets its hooks into the audience. It might be the cast of characters, it might be Erin herself, it might be the dark humor, it might be the creative kill scenes. In many ways, it’s almost a near-perfect home invasion film, staying grounded even while the whirl-y-gig of menace and terror threatens to spin out of control. Much like 2019’s Ready or Not, which runs on a similar premise but is much more openly outrageous, You’re Next is anchored by a singularly compelling performance by its lead actress, leading to a most visceral and entertaining experience.

What other home invasion horror films do you recommend? Does Erin belong in the top pantheon of horror’s most famous Final Girls?

Next week, Johnny’s Movie Club takes a look at what happens when the home being invaded is a castle, and the invaders are a plague. It’s Roger Corman’s adaptation of Edgar Allen Poe’s Masque of the Red Death.

“She’s innocent. Mostly. She killed the neighbor, but the bitch had it coming.”