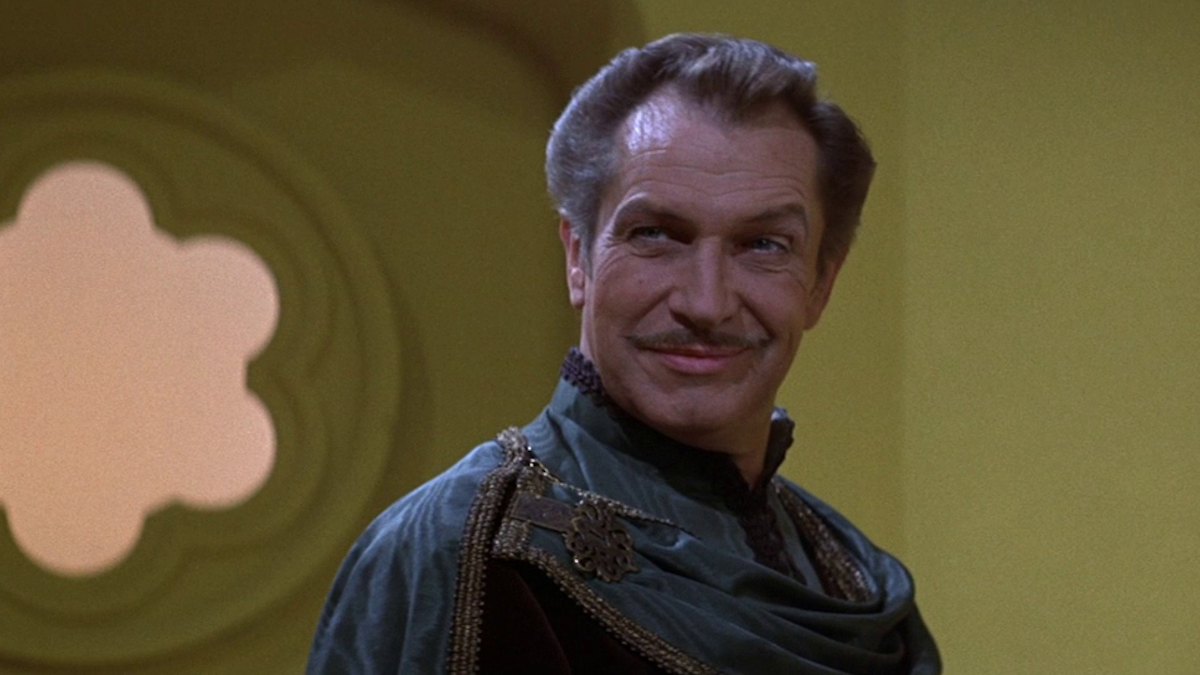 The original trailer for Roger Corman’s 1964 adaptation of Edgar Allen Poe’s Masque of the Red Death claims it comes from the “Master-Designer of Evil Desires” and stars the “Prince of Horror” Vincent Price. When you also consider that it was produced and directed by a man called the “Pope of Pop Cinema,” that’s a lot of titles for a single, 90-minute film to live up to. The surprise is that…well, it actually does for the most part.

Price plays Prince Prospero, whose domain includes a village recently afflicted with a plague called the Red Death. To protect himself and the rest of the one-percent of medieval-esque Italy, he locks himself in his castle along with the rest of the nobility and with Francesca (Jane Asher), an innocent young woman from the village. A proud Satanist, Prospero has plans to corrupt Francesca, but everything starts to go awry during a decadent masquerade ball…

And most of us know what happens after that. Then again, the plot of the film is never really the biggest selling point. It rarely is in Corman’s work, even in the best of times. Although Masque is certainly among the best work he’s ever done this film is all about mood, visuals, and Vincent Price, all three of which deliver remarkably.

Corman was notorious for cutting corners and for his…shall we say “expedited” shooting schedules. His series of films based on Poe’s works—of which Masque is the seventh and definitely the highlight—are a distinctive and conscious break from that approach. The sets are sumptuous, the costumes spectacular, and the designs bold and compelling. While there’s little attention paid to historical accuracy or practicality, Corman’s frame here is rarely boring to watch.

There’s also a marked lack of camp present, even though that is unavoidable. Aside from a rather clumsily-staged scene involving an attack falcon, it’s clear Corman was dedicated to making a film that was both sincere and entertaining. While the purple script by Charles Beaumont and R. Wright Campbell occasionally threatens to elevate the film into the camp stratosphere, the understated and natural performances of the cast keep it relatively grounded.

It’s Vincent Price who especially keeps the film on track and striding forward. Price’s undeniable charisma and velvety voice make Prospero a figure of devilish charm and intriguing wickedness. Prospero is a complete monster, but it’s hard not to appreciate him because of Price’s singularly compelling performance. When Francesca starts to warm to him, it’s not hard to see why. It makes the actual male protagonist, Francesca’s lover Gino, seem superfluous by comparison. Played by David Weston, his handsome, youthful energy is appealing but ultimately no match for Price’s sophisticated confidence.

Corman leans heavily into the metaphors of Poe’s original work here, sometimes being a bit too on the nose about it. This is especially true during the climax, when the personification of the Red Death invades the masquerade ball. However, his dedication to Poe’s original intent is admirable, and even the additions he makes to the source material seem so well-integrated that it makes you re-read the original story to see if you’d forgotten they were always there.

For all that Masque does well, it does still suffer from some chronic Corman-isms. The film is an incredibly slow burn, and even the finale has a relatively modest if not constant energy. The first act also drags quite a bit, as Corman spends far too much time setting up the characters who are not Prospero. While they might be the heroes of the piece, we’re here to see Vincent Price, and every scene he isn’t on screen can’t help but feel like a bit of a waste. There’s also a bizarre psychedelic dream sequence that, while interesting on its own, fits poorly within the comparatively naturalistic narrative.

Regardless, Masque is a moment of genuine brilliance from Corman, a master class in villainy by Vincent Price, and a reminder of the enduring power of Poe’s work. It might not be the most obvious choice for viewing during a time of pandemic, but it does remind us that station, wealth, and privilege are no shield from the horrors of the world. There’s an odd bit of comfort in that, to be sure, and sometimes even odd comfort is a welcome thing.

Next week, the apocalypse goes from micro to macro and from campy to satire when we look at the mini-series Good Omens.

Masque of the Red Death can be streamed through Amazon Prime and Vudu.

Billie: I used to be like you…until I was 25, when out of the blue, my cleaning lady shows up as I’m brushing my teeth. Except, she’s got no toilet brush and rubber gloves. She’s naked and bloody. Her husband murdered her with an ice pick.
Constance: It’s hard to keep good help.