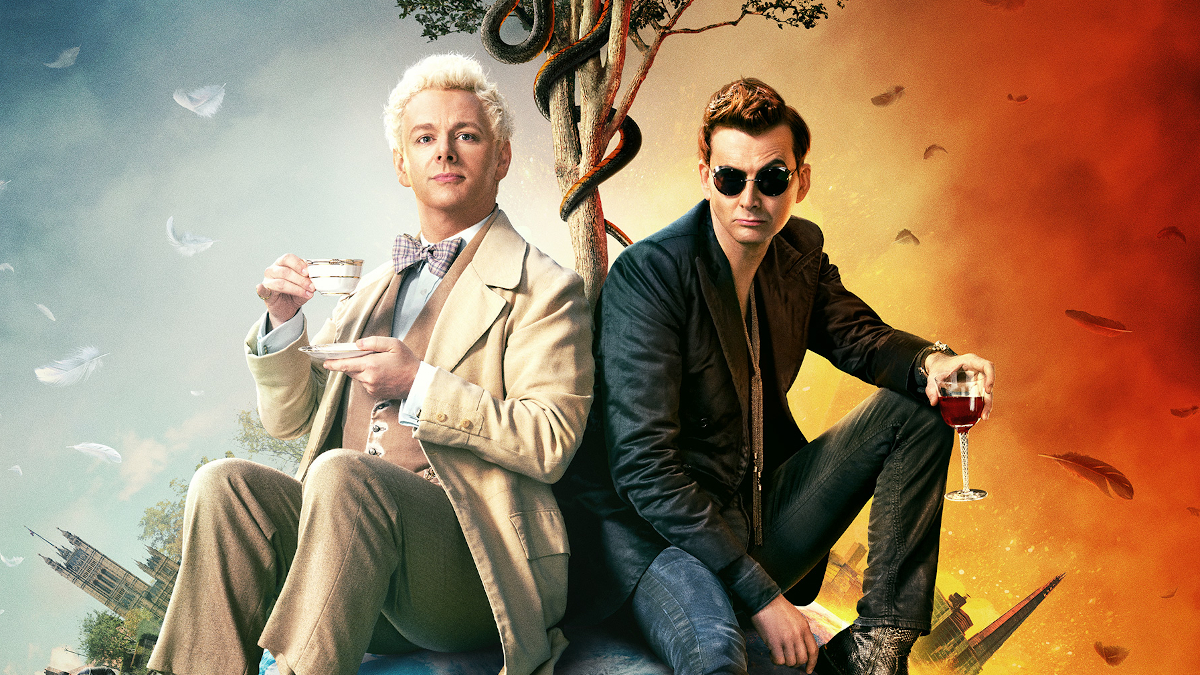 There’s a kind of genius in finding humor in the darkest and most serious of topics, and there are fewer topics more serious than the end of the world. But that’s the power of Good Omens, the comedic and philosophical classic by Terry Pratchett and Neil Gaiman. Since the book just turned 30 years old, it seems like a great time to look at something whose thesis is that the end of the world really isn’t the end of the world.

Good Omens follows the angel Aziraphale (Michael Sheen) and the demon Crowley (David Tennant), who have been on earth literally since day one. Tied together since the dawn of creation, they can’t help crossing paths with each other and have developed a rather unique friendship. When it appears that the coming of the Antichrist and the battle of Armageddon is very much nigh, both set out to stop it all, because frankly, they like Earth and don’t want to see it go away. Concurrently, a handful of mortals are also trying to stop Armageddon themselves, unaware of the exact scope of the powers they’re dealing with.

What complicates the situation, and where Good Omens derives a lot of its metaphorical weight, is the fact that Heaven and Hell really, really want Armageddon to happen but can’t really justify why beyond “because.” Aziraphale and Crowley, despite their otherworldly origins, have essentially gone native. They’re the most human characters in the entire series by a huge margin, with relatable desires, vices, appetites, and habits. And they ask enough questions to get them in big trouble with their respective bosses, especially with the archangel Gabriel (a deliciously-styled Jon Hamm).

Good Omens isn’t so much focused on the actual events of Armageddon, however, but rather it focuses on breaking down the established lore and common threads of apocalyptic narratives. The situation isn’t nearly as clear-cut as we might expect from an end-of-days story, especially since both Heaven and Hell seem equally antagonistic to humanity. Then there’s the fact that God Herself (Frances McDormand) is narrating the whole thing in a rather detached manner, seemingly amused that literally everybody who claims to understand Her plan doesn’t have the slightest clue what they’re doing. The most dangerous thing here isn’t the apocalypse itself but the very idea that the apocalypse is something that eventually has to happen no matter what.

One aspect of what makes the whole thing work is its dedication to its source material. Neil Gaiman himself wrote the series, and he keeps the novel’s tone and scope intact even though it’s not a direct book-to-screen translation. What’s been cut out isn’t essential to the plot, what’s been added fits in very well, and the spirit of the original remains wholly intact. It’s also been designed to allow for people unfamiliar with the work to easily get into it and its characters, even devoting almost an entire episode to Aziraphale and Crowley’s history together through the millennia.

And honestly, it’s Aziraphale and Crowley who make the series worth watching just on their own. Michael Sheen and David Tennant are beyond perfect in their roles. Sheen captures Aziraphale’s measured optimism and more refined mannerisms, while Tenannt’s Crowley is a cynical rock star who’s as charming as is he is mischievous. Their chemistry is stellar, and they play off of each other beautifully. Both the series and the book feature a running gag where everyone who meets Aziraphale and Crowley assume they’re romantic partners, and Sheen and Tennant’s rapport is so lived-in and dynamic that it makes total sense.

Which is not to say the supporting cast doesn’t bring it, because this might be one of the best-cast series in a long while. From Adria Arjona’s imminently appealing occultist, Michael McKean’s daffy self-appointed “witchfinder,” and Jack Whitehall’s adorkable tech nerd, there’s hardly a bad performance in the entire runtime. Over the course of the series, every character gets at least one moment to shine, and the cast of characters never gets too unwieldy or confusing.

What does bring the series down a little, however, is its pacing and speed. While Gaiman did remove a lot of extraneous plot threads and characters, he still could have tightened things up just a little bit more. The first half of the series moves at a slower pace than the second half, and it can take a while for things to really get going. It’s a remarkably pleasant journey all the same, but even the best trips can sometimes feel a bit too long while you’re in the middle of them.

Good Omens is much more than a satirical take on the end of the world, although in that respect is succeeds brilliantly. It’s a meditation on the evolution of thoughts about the end of the world, a critique of blind religious devotion, and a challenge to the ideas of destiny and predestination. It’s a series about an angel and a demon, but it’s unquestionably human at its core. Who knew the apocalypse could be so entertaining?

Next week, we keep the funny going by moving from the end of the world to the end of summer at the beach. No stay-at-home order can stop Psycho Beach Party.

Good Omens can be streamed through Amazon Prime.

“I am utterly indifferent to sexual orientation. On the other hand, I cannot abide hypocrites like you, Reverend. Tell your flock where your genitals have been before you speak for me.”