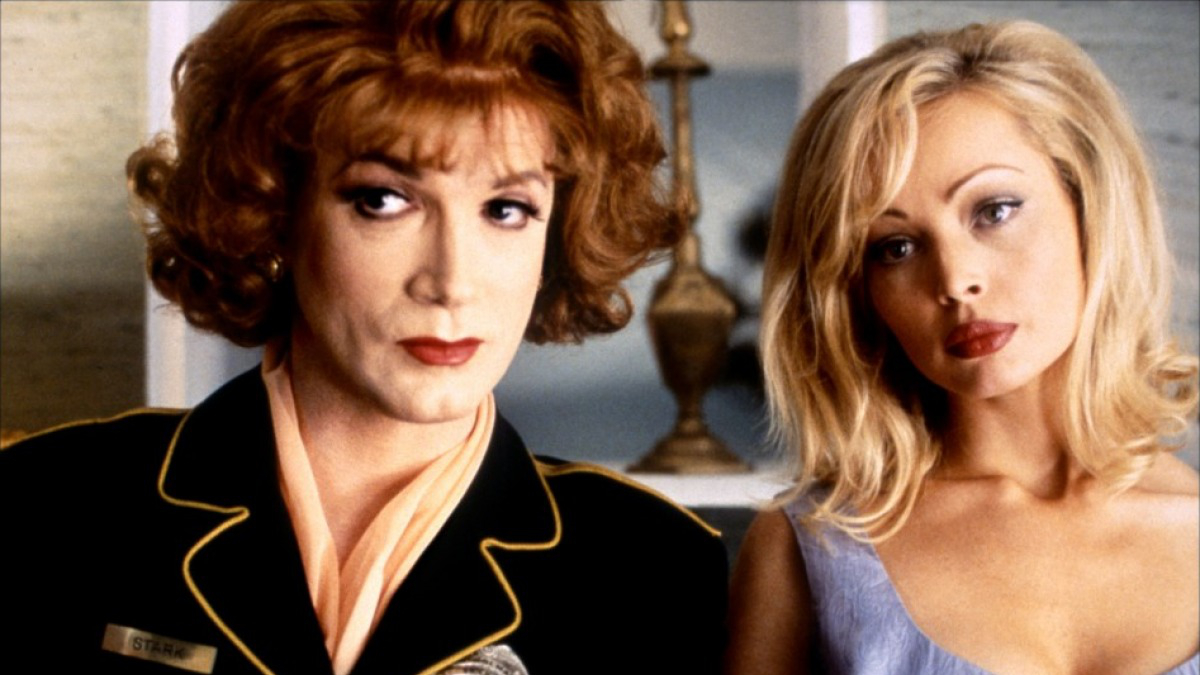 The beach brings back such wonderful memories. Fun in the sun, soaking up the surf. Boys in board shorts running on the beach, girls in bikinis getting a tan. People getting horribly murdered by a vicious serial killer. You know, good times. Throw in a drag queen, a moonlighting Xander Harris, and a fair amount of queer subtext, and you’ve got Psycho Beach Party.

Florence aka “Chicklet” (Lauren Ambrose) is looking forward to a summer vacation on the beach, learning to surf, and hanging out with the boys. But that gets complicated when her friends start getting taken out one by one by a killer with a big knife. Investigating the situation is Captain Monica Stark (Charles Busch), and she’s suspecting everybody. That includes surfer guru Kanaka (Thomas Gibson), Chicklet’s crush Starcat (Nicholas Brendon), and b-movie actress Bettina (Kimberley Davies), who’s hiding out in a beach house from her studio.

Psycho Beach Party began life as the play Gidget Goes Psychotic in 1987, written by Charles Busch and starring him as Chicklet. It draws from 50s psychological thrillers, 60s beach party movies, and 70s slasher films, but it isn’t really a true parody of any of those genres. Instead, Busch finds the piece’s humor in how those three influences smash up against each other unfiltered. It’s camp to be sure, and it’s consistently hilarious, but it also plays itself with a curious and attractive sense of seriousness. It’s self-aware without ever letting that fact overtake the narrative.

The film packs a lot of material into 95 minutes, with tons of characters, subplots, and (mostly) off-screen murders. Busch and director Robert Lee King keep things in a remarkable balance, however. The pacing is quick but not rushed. Every scene is staged with efficiency, making the most of the film’s low budget and compressed schedule. Most scenes were done in one or two takes, and while that sometimes leads to some awkward rhythms in the dialogue, it actually works in the film’s favor. If you’ve ever seen the infamous 1964 monster musical Horror of Party Beach, you know the kind of stilted, clumsy energy Busch and Lee are successfully replicating.

What also makes the film work as well as it does are the characters and cast. The beach films it emulates usually had eccentric supporting characters, and that’s exactly what we have here, albeit with a modern twist. There’s wheelchair-bound Rhonda (Kathleen Robinson), who’s a grade-A Mean Girl. Or surfers Yo-Yo (Nick Cornish) and Provolone (Andrew Levitas), who really love oil wrestling each other. And let’s not forget Florence’s tightly-wound mother Ruth (Beth Broderick, giving every line her absolute all).

However, it’s Lauren Ambrose who steals the show, playing multiple characters through Florence’s split personalities, sometimes changing moods in a nanosecond. It’s such a trip of a performance that it’s baffling that it hasn’t received more attention over the years. Ambrose changes her posture, her timbre, her mannerisms with each personality like flipping a switch, and she handles the extensive and florid dialogue Ann Bowman’s given with absolute ease.

Charles Busch himself is no wallflower here, either. Monica Stark was written as a kind of grand-dame role, the part an actress past her prime but not her glamour would take had the movie been made in the 60s. Busch’s energy is tailor made for this kind of campy and melodramatic role, though, and he’s magnetic. Like the film itself, the humor comes from playing the character completely straight (so to speak), adding a level of subversiveness from being played by a drag queen. Busch’s inflections are so overly theatrical that just the tone of his voice is pure comedy.

In fact, between Ambrose and Busch, it’s easy to forget about some of the characters. It features future Oscar nominee Amy Adams in one of her first film roles, and good as she is, she all but disappears compared to the outsized personalities around her. Similarly, Matt Keeslar’s Swedish exchange student Lars appears in the film so randomly that he first comes off as gratuitous. Again, he’s fine in the role, but until the third act comes around, you find yourself wondering what he’s doing there.

But to be honest, it’s difficult to really explain what makes Psycho Beach Party so good without experiencing it for yourself. Calling it camp only goes part of the way to explaining it. Saying it’s a satire isn’t completely accurate, either. Let me just break it down in high-fidelity stereophonic sound: this film is funny as hell, and you should definitely check it out. It’s the most killer beach party you’ll ever attend.

Next week, Johnny’s Movie Club takes a break so we can get back to reviewing new releases. Whether you’re ready or not, it’s time for a mysery with Scoob!

“Every Christmas, my Mom would get a fresh goose, for gooseburgers; and my Dad would whip up his special eggnog out of bourbon and ice cubes.”