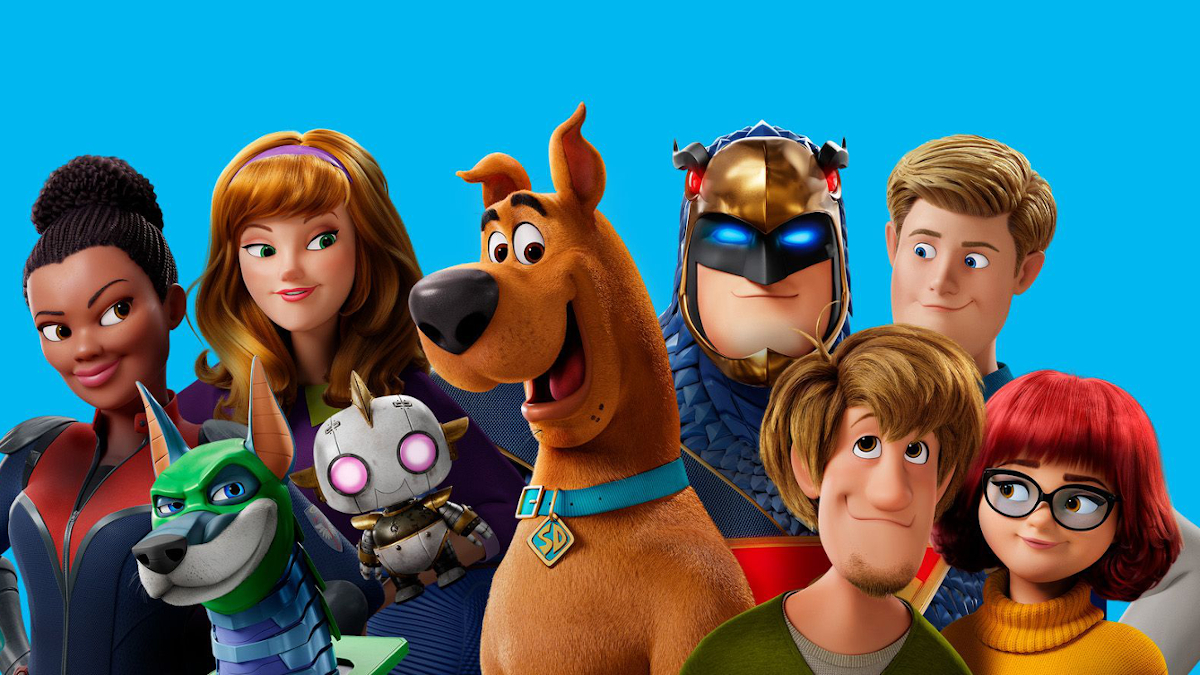 Watching Scoob! at home instead of a theatre was an interesting experience. I watched it in my pajamas at 8:00 am, with my Scooby-fan husband in my apartment instead of taking a bus to a suburban movie theatre. We were able to make noise, shout at the screen, and riff away without people getting annoyed. It also helped the movie go down more as a bright, sweet piece of fun (which it excels at) instead of a narrative piece of cinema (which it…does not excel at).

After an opening prologue detailing how those mod, mystery-solving, meddling kids met, we move forward to modern day. Amiable slacker Shaggy (Will Forte), his inexplicably articulate dog Scooby (Frank Welker), and the Gang are a bit of a crossroads. They want to take Mystery Inc. to the next level, but they’re having difficulty making it happen. After Shaggy and Scooby are attacked by robot creatures and saved by the superhero Blue Falcon (Mark Wahlberg), the Gang gets embroiled in a scheme by the eeevil Dick Dastardly (Jason Isaacs)…a scheme in which Scooby is the key element.

Let’s get one thing out the way right now: Scoob! is a lot of fun and goes down really easy. Let’s get another thing out of the way: it’s also kind of a mess. It shouldn’t be, but it is. Its individual parts work fine, but they don’t come together to make a compelling whole. That doesn’t mean it isn’t a great time, because it’s highly entertaining especially for long-time Scooby fans. But it just doesn’t hit as precisely as it probably should.

A lot of that has to do with the fact that the film can never really determine exactly what it’s supposed to be. The trailers billed it as an origin story, but aside from the opening prologue, that’s not what it is. It’s not really an average Scooby adventure, either, since the Gang travels all over the world to thwart and/or escape Dastardly’s plans and loses at lot of the “haunted house mystery” vibe the show is known for. It’s also hampered by the fact that for a fair portion of the film, Scooby and the Gang aren’t even in it. For a film called Scoob!, there is a whole lot of Blue Falcon and Dynomutt!.

Which is not to say that extra characters are wholly unwanted. In fact, they’re often genuinely amusing aside from a highly gratuitous and unnecessary third-act detour. But Scoob! is very much a blatant attempt by Warner Bros. to create a Hanna-Barbera shared cinematic universe. And that’s…cute. Really, it is. However, when I pay premium prices to watch what was meant to be Scooby-Doo’s first cinematic animated feature, I expect to see a lot of Scooby, Shaggy, Velma, Daphne, and Fred. Certainly more than we get here.

At least the cast of characters is uniformly well-performed and presented. While it’s unfortunate that nobody from the previous animated incarnations of the franchise are back aside from the legendary Frank Welker as Scooby himself, the voice cast does a great job, and the script doesn’t try too hard to modernize the characters. It’s even self-aware to point out how Shaggy tends to talk “like how an adult thinks a teenage hippie speaks.” Will Forte does do a good job as Shaggy, though, dialing down some of the more extreme vocal characteristics while staying true to the heart of the voice originated by Casey Kasem and further perfected by Matthew Lillard.

In general, none of the cast try too hard to perfectly emulate the established voices of the characters, and your mileage may vary on that depending on the depth of your Scooby fandom. The voices all fit great, though, and the characters have even been slightly tweaked to match their voice actor. Velma, for instance, has a slightly darker skin tone and drops the occasional Spanish word because she’s voiced by Gina Rodriguez. Fred is a little bit more like a typical, all-American jock because he’s voiced by Zac Efron. In every case, though, it doesn’t betray the character’s core or change what we know of the series.

And as much as the film loses by focusing on the non-Scooby characters, it’s hard to fault the actual characters much. In fact, the film’s take on Blue Falcon is probably one of the most interesting things about it. This BF is the son of the original, and he’s less a cool, Adam West-as-Batman hero than he is a spoiled millennial in a fancy costume who’s constantly reminded that he’s not the hero his father was. Mark Wahlberg does a great job in the role, helping keep the character charming even while he’s being a jerk, and he plays off of Ken Jeong’s snarky, hyper-competent take on Dynomutt. For a long-time BF fan, seeing the dynamic between the two flip so much was kind of fascinating.

It’s hard to fault the film’s ambition, even while the story’s broader scope seems an odd fit for the Mystery Inc. crew. Again, the film’s enthusiasm and genuinely infectious energy helps ease the rough and highly predictable story beats, and it never winks too hard at the camera. Also helping is the fact that it’s being watched at home instead of in a theatre. In a proper cinematic setting, it’s likely that Scoob!‘s messy narrative and throw-everything-in approach would have fallen apart. There’s a distinct kind of casual forgiveness in home viewing, especially when it’s coupled with nostalgia for Saturday mornings and sugar cereal.

And sugar cereal is definitely the right metaphor here. Does it have any actual nutritional value? Not a bit. Are there way too many ingredients and additives? Oh, hell yes. But is it delicious and makes you feel awesome? Damn right it does. It might not be a meal, but it’s a very welcome snack.

Scoob! can be streamed through Amazon Prime and Google Play.

Johnny’s Movie Club returns next week with the gay superhero you’ve never heard of: get ready to meet Surge of Power in an action-packed double feature!