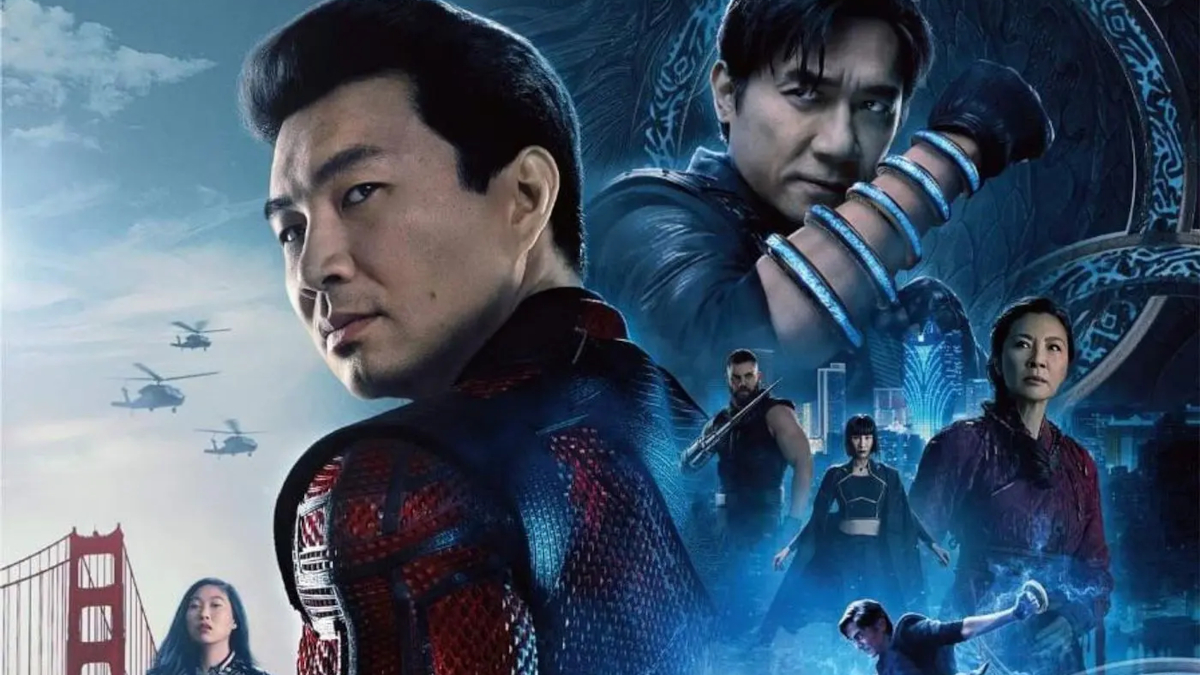 Marvel’s road to diversity has been long and slow. It took the MCU ten years to release a film whose lead was a hero of color with Black Panther. It followed up with Captain Marvel, its first female-led film, shortly after. Now, with Shang-Chi and the Legend of the Ten Rings, we have our first film with an Asian lead. Besides being well worth the wait, it’s a surprisingly emotional and character-driven story that still hews closely to Marvel’s formula. Sometimes, a bit too closer.

Shaun (Simu Liu) is a young man living in San Fransisco, working as a valet with his best friend Katy (Awkwafina). Their lives take a dramatic turn when they’re attacked by assassins and it’s revealed that Shaun is actually Shang-Chi, son of Wenwu (Tony Leung), infamous leader of the dreaded Ten Rings criminal empire. Thrust back into his father’s world of violence and intiruge, Shang-Chi faces harsh truths about his family, his life, and where he fits into the world while trying to stop his father’s destructive plans.

Shang-Chi, despite being a relatively minor Marvel character in the comics, has actually had a film in development as far back as 2001, and was part of a slate of Marvel properties that were initially announced back when Marvel Studios was just beginning. And before that, in the 1980s, Stan Lee had hoped to make a Shang-Chi adaptation starring Brandon Lee.

Shang-Chi’s story is one that lends itself well to a cinematic treatment. He’s a young man gifted with skill and power, coming to grips with his identity as a person and as the son of a villainous mastermind. There’s a lot of potential there, but given the character’s history and context in the comics themselves, it’s probably best that it took some time to gestate and evolve. After all, in the comics, Shang-Chi’s father was originally Fu Manchu, a racist stereotype and a prime avatar of the Yellow Peril antagonist. Even as Wenwu — a.k.a. a highly revised version of the infamous Mandarin — there’s problematic potential.

However, screenwriter Dave Callahan and director Destin Daniel Cretton do a skillful job of rewriting Shang-Chi’s story without sacrificing his narrative arc or cultural background. Both men are Asian-American and cognizant of Shang-Chi’s place in the comics, and they do right by Shang-Chi himself and his supporting cast. Even if the story sometimes seems a bit undefined, the character themselves are strong.

Shang-Chi’s story is primarily an emotional one that’s fused onto a more traditional MCU origin story plot. It’s an uneasy combination at times, with character beats often colliding with the unspoken urge for Things to Happen. In what’s almost an inversion of the MCU formula, the film finds its strongest moments in the times when the action isn’t moving. The film’s real through-line is not the desperate fight to stop Wenwu’s plans but the growth and empowerment of Shang-Chi himself (and to a lesser extent, Katy and Shang-Chi’s sister Xialing). Even Wenwu himself has an emotional arc that is honestly far more interesting than his plans to do Villain Stuff.

The internal narratives are supported over the course of the films by numerous flashbacks that illustrate important moments in Shang-Chi and Xialing’s lives, both good and bad (and sometimes highly traumatic). At first, this approach can come off as lazy and jarring, a cheap form of exposition, especially if you go into the film expecting a typical MCU event. It takes some time to realize that these flashbacks are part of the real story, shading and coloring the characters you thought you had a handle on, giving them new dimensions and twists. While this is often the purpose of flashbacks as a narrative device, here they take on a special kind of significance.

All of this talk about the emotional narrative shouldn’t suggest that the action or physical part of the film is ignored or downplayed. Cretton knows how to frame his compositions well, and especially in the second of the film shows a surprising skill with color, CGI, and spectacle. The fight scenes are often intricate and gorgeous, often scaling back on the MCU’s trademark hypercut nature. The editing slows down to show off the martial arts skill of its characters, hypnotic in their grace and power. Each character has a distinct way of fighting that often acts as an extension of their personality. Shang-Chi himself fights hard and fast in the first half of the film, eventually incorporating an open-handed and calmer style as he comes to peace with himself.

Simu Liu does a good job bringing Shang-Chi to life, creating a balance between the character’s harsher upbringing under Wenwu and his more carefree “Shaun” persona. He plays the character with a more restrained emotional energy than expected, but that energy is also very much directional and intentional. On a purely physical level, he’s beautiful to watch and has an easy, open charm. His chemistry with Awkwafina is fantastic and natural, the two coming off as very believable best friends. Awkwafina’s performance in and of itself is highly enjoyable, with Katy’s character playing off of both Awkwafina’s established brand of comedy while also allowing her many effective dramatic moments.

The supporting cast includes several fine performances as well, including Meng’er Zhang as Xialing, who has her own distinct emotional evolution that’s connected to but distinct from Shang-Chi’s. Both characters are assisted by the divine Michelle Yeoh as Ying Nan, a master of mysticism that helps them come to term with their pasts and discover new ways of expressing their identities. Yeoh’s presence is always welcome, and even if she does seem more than a little typecast in the role of the wise mentor, it’s one she plays very well.

The most captivating performance in the film, however, is Tony Leung as Wenwu. Leung approaches the character as a human first, as a villain a very distant second. Wenwu has highly relatable motivations, and in quiet moments with the other characters even comes off as charming and likeable. He has a spine of cold steel however, and when the film calls upon to do the Bad Things, he goes about it with an intriguing and even attractive brutality that he wields like a master.

Leung’s performance sometimes even seems a bit too good for the film, but that’s only because the actual plot isn’t nearly as interesting as the emotional journeys each character goes on. The narrative even sometimes feels like an afterthought or just as the carrier for these stories. At points, it even seems like the plot outright gets in the way, since it’s never as interesting as what’s going on inside the characters’ hearts and heads.

That being said, it’s no worse than the plots of any other MCU entry. There have even been worse. And like the films that came before it, it never dips below the MCU’s relatively high standards. In terms of character arcs however, it flies high and strong, helping it to often rise above the typical MCU film. More so than his fists and fights, both Shang-Chi the character and Shang-Chi the film are defined by the struggles of the heart, and that’s often a much more interesting battle than any supervillain scheme.

“Queers are just better. I’d be so proud if you was a fag, and had a nice beautician boyfriend…I’m worried that you’ll work in an office, get married, have children, celebrate wedding anniversaries. The world of heterosexuals is a sick and boring life.”